When I look through my blog, I realize large chunks of information and photos are missing from my day to day life. I seem to blog about things only when I have things to bitch and criticize about, therefore making me sound like a whiny bitch haha..

So that is partly why I am trying to update a photo per day from now on. Doesn't have to have a lot of words. Not in today's case though.

As I was looking through my blog, I also realize I forgot to upload these pre wedding photos. They were taken back in April, but I only got the photos a few days or a week before my wedding. Maybe that's why I was so late in sharing them. 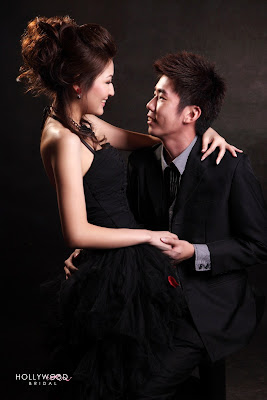 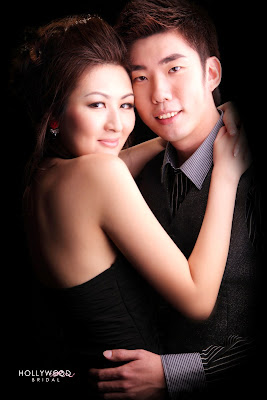 10 mins into the photo shoot, I realize, I have a new found respect for models. How do they do this? Its so much harder trying to look good in front of the camera. 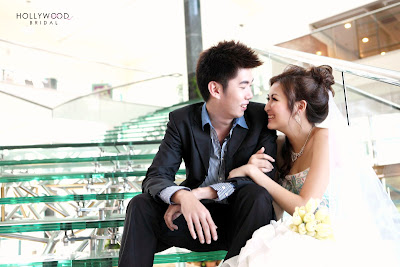 This was at the State Library. Plenty of people go there for wedding photos. I went there twice for both my pre wedding photos. Both with different effects. Love both. :) 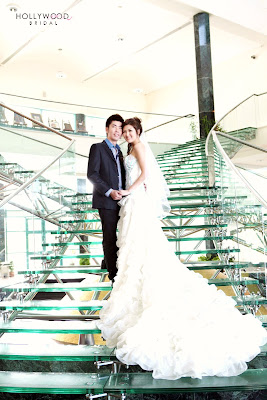 When you are all dressed up in a wedding gown, and have an entourage of people following, including the photographer and his big ass camera and lens, his assistant, and the make up artist carrying bags, props and the other gowns, you quickly become used to the stares wherever you go.

People staring, pointing and openly taking photos with their own phones and cameras. Random people smile at you and come up to congratulate you. I never knew Kuching people could be so friendly. Hahaaa.. 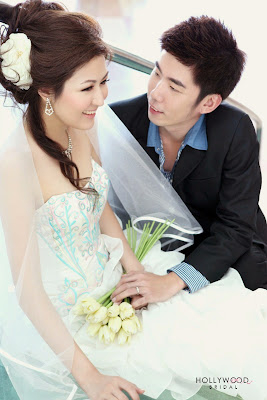 And we had to act lovey dovey and kiss at public places, with people staring, and the photographer directing you how to stand or move. 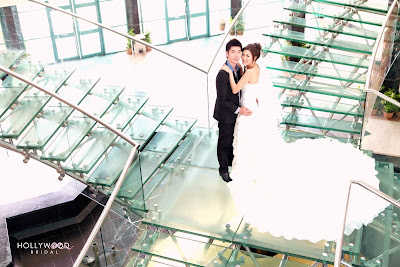 Plus we are monopolizing the stairs. People have to wait by the sides, at the top or at the bottom while we pose. But like I said, you get used to it after a while. Just smile, wave and say sorry. People are nicer than you thought. :D 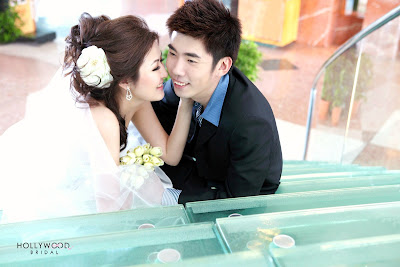 Taking photos out in the hot sun was the worst. The sun = my enemy. 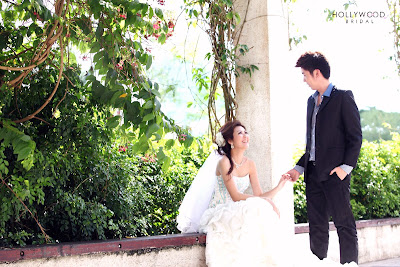 Let me tell you something. That beautiful wedding gown is heavy! It is gorgeous and I chose it. But it is also heavy and awkward to walk around without tripping. And so long that its hard to walk AND carry that looong train with me.

Scenario 1: The toilet is wet, so how? Imagine having to squat in that while holding the dress above me. End result: I can barely see in front of me.

Hahha..I'm spoiling my wedding photos by talking about this aren't I? Oh well that's just me. 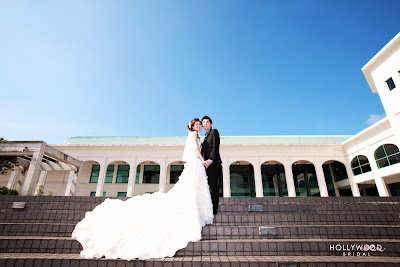 I still love the photos they took though and the dress really was gorgeous! ♥ 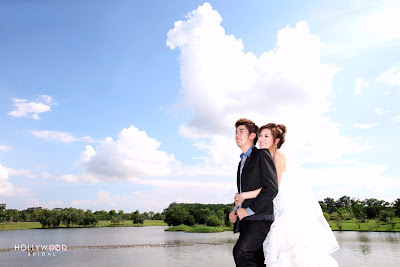 Photographer pointed out the heart shaped cloud above us after we took this shot. I nodded, smiled and asked: that's it? We can go in now? (out of the sun)

Like I said, I have a new found respect for models. Photo shoot outdoors are tiring as hell. We have to change and re apply make up outside. And I forgot to bring slippers so I was walking around in my high heels trying not to trip on my own dress. Haha dumb ass. 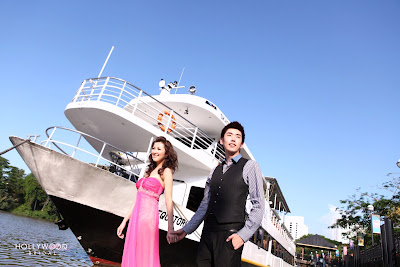 We went to the waterfront for the river cruise next. I forgot how much it was to take the cruise. It takes you around the waterfront. Sunset over the river. It was kinda nice. Different. I wanted sunset photos so we chose this. 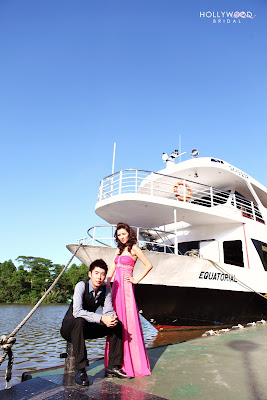 This was inside the ship. Surprisingly there was quite a lot of people on board. Gulp. And if you noticed, the ship was not all that big. Which means, we have an audience.

Yea. No shit. They were literally taking photos of us and pointing at us while we took photos around the ship. 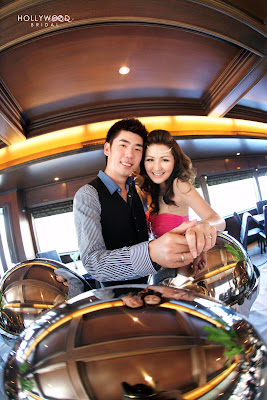 Despite having a crowd watching us as we do this: 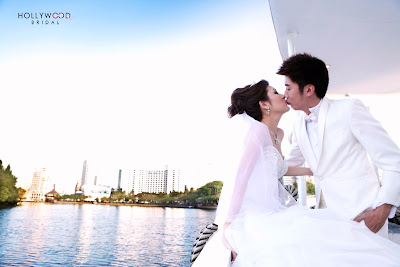 I was nervous enough already..btw, I love that dress! Gorgeous. If you noticed, I wore it for my wedding actual day as well. In the morning session. And the same veil. And probably the same tiara/crown. But my hair style and make up was a bit different. 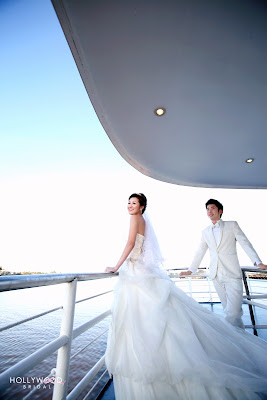 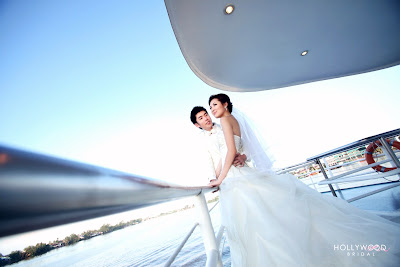 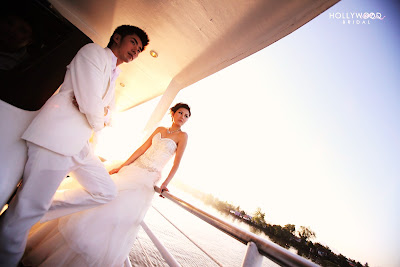 I edited the above photo above hence the colors btw. Don't know if it looks good or not since we look so fierce anyway. 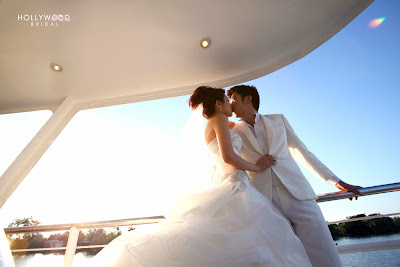 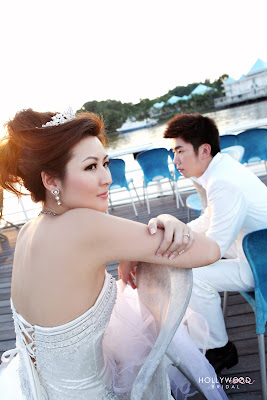 I personally like this photo above. ♥ I was sitting there minding my own business, resting when the photographer took this. Candid. That's why I like it! :D Not so posey posey. 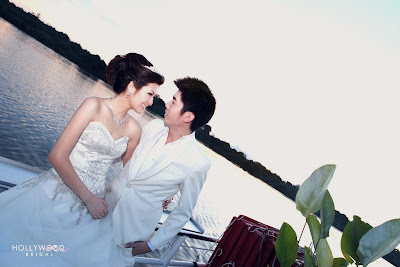 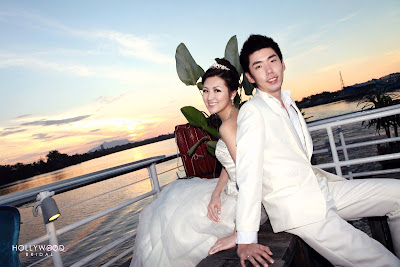 That plant behind spoiled the picture somehow. 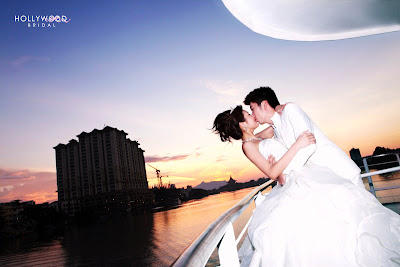 So what do you think of my pre wedding photos from Hollywood Bridal? Comments please?

Let me tell you how I feel. The whole truth and nothing but the truth.

I felt that their service was good. They were all smiles and very friendly. I do not feel they pushed me to buy their package or to pay for extra stuff. I paid extra for the ampule and to upgrade the dress (which I feel was too much, but then also typical as with other bridal studios). I mean, other studios are doing the same thing anyway.

The photos. The final result. The albums that I am taking home with me. All that hassle. Was it worth it?

I admit that while choosing the photos, while choosing from the hundreds of photos, I was disappointed. I was SO disappointed. Cs as well. They (staff at Hollywood) could feel it. I pouted and sulked and they consoled me: honestly speaking, you look better in real life than in your photos. SULK even more!! :( I paid for those photos, they better be good!

But then again, when I finally got the albums, I got over it. The overall effect was good. I was pleased again. The way they designed the photos. They didn't edit much because I don't want to NOT look like myself in my own wedding album ok!

They keep telling me, can edit. Can edit. But I don't want to! I want to look like myself. Not some picture perfect weirdo. If I had known, I would not have listened to the photographer when he said smile more. Show your teeth. I have crooked teeth btw and hate it. Haha..so it was easy choosing the photos. Any photos that show my teeth, out and out.

But like I said, in the end I was happy when I got my album. Relieved was the word. Glad that it was not as bad as I originally thought. The photos look great.

That was until I took the albums home and showed my family...

My family who know me in and out and have seen me in all sorts of outfits and make up, had sooo much to criticize.

Good God you should listen to Winnie. She immediately pointed out the things that I hoped no one would notice. Why is there a spot here? Why your face looks weird? They photoshop too much! Cs face to white. His eyebrows this and that and so on and so forth. :D

But ahh..really its not that important anymore. Where are these fabulous albums now anyway? Inside a trunk hidden away, and I haven't opened them once since I moved here. Overrated!!

Hopefully I didn't offend anyone with this post. If I did, sorry. Bye.
Posted by Amy at 2:20 pm

Email ThisBlogThis!Share to TwitterShare to FacebookShare to Pinterest
Labels: Wedding

I love the black dress!

I can feel that the angel and devil is fighting in your heart when you're choosing your photos...angel was saying "hey you looked great!" but devil was saying "hey is it only this that i was paying for?" haha...no offence but I personally feel that sometimes their outcome is just a lil bit hmm...not up to our expectations heh? there are so much choices out there and actually if I were to choose, I really cant make a decision...shall ask for tipsy from you as a 'senior' huh~ *cheers*

I don't remember deleting a comment. What's wrong with blogger/or my memory?

anonymous: me too. wish I could keep it.

That's really a marvelous post.I think the marriage is the one of the most memorable moment in any person's life.And to capture these moment for life long we should refer a very good photographer who are expert in its profession. Keep posting. Thanks..
korea pre wedding photoshoot